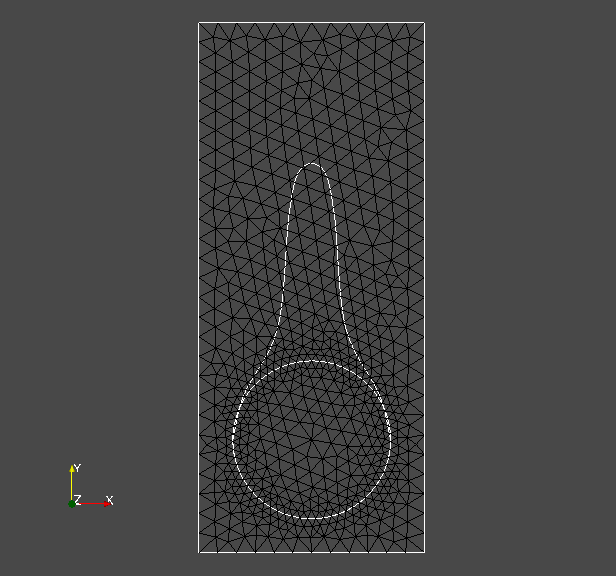 Exciting progress on the theory of shape optimization has been made by the research group in Trier University. Daniel Luft and Volker Schulz developed a new approach to address the handling of mesh quality and the optimization of shapes in a unified framework. These so-called pre-shapes extend classical shape space approaches, and permit the formulation of regularizers for general shape optimization problems. With a suitable pre-shape calculus, free form deformations for mesh morphing based shape optimization routines can be regularized in such a way, that the occurring mesh iterates are stabilized in their structured. The user can specify his or her desired mesh quality and adaptation, perhaps depending on the actual problem, and harness the pre-shape regularization at minimal additional numerical cost.

The image above shows the starting mesh with a circular initial shape for an exemplary tracking type shape optimization problem, where the target shape is also depicted. As a working example, the pre-shape regularization is used to enforce uniformity of the computational mesh during the gradient descent while solving the shape optimization problem. 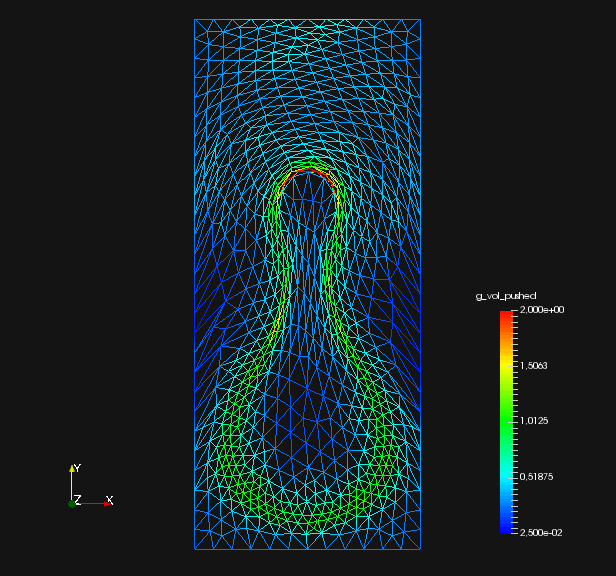 Next, we see the resulting final meshes for the unregularized routine, which highlights significant deformation of the mesh. Espescially the upper tip of the final shape suffers from compression of neighboring cells, making numerical computations instable. 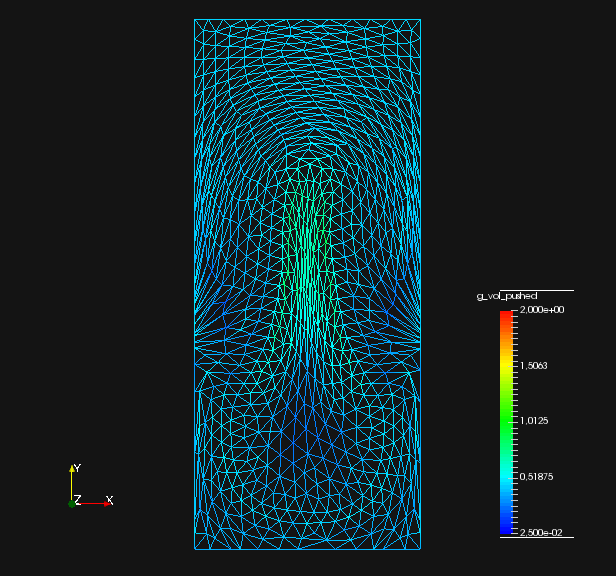 The last image is the final mesh of the routine with additional pre-shape regularization. The cell volumes are more uniform, and the severe compression of cells close to the vicinity of the shape is mitigated. 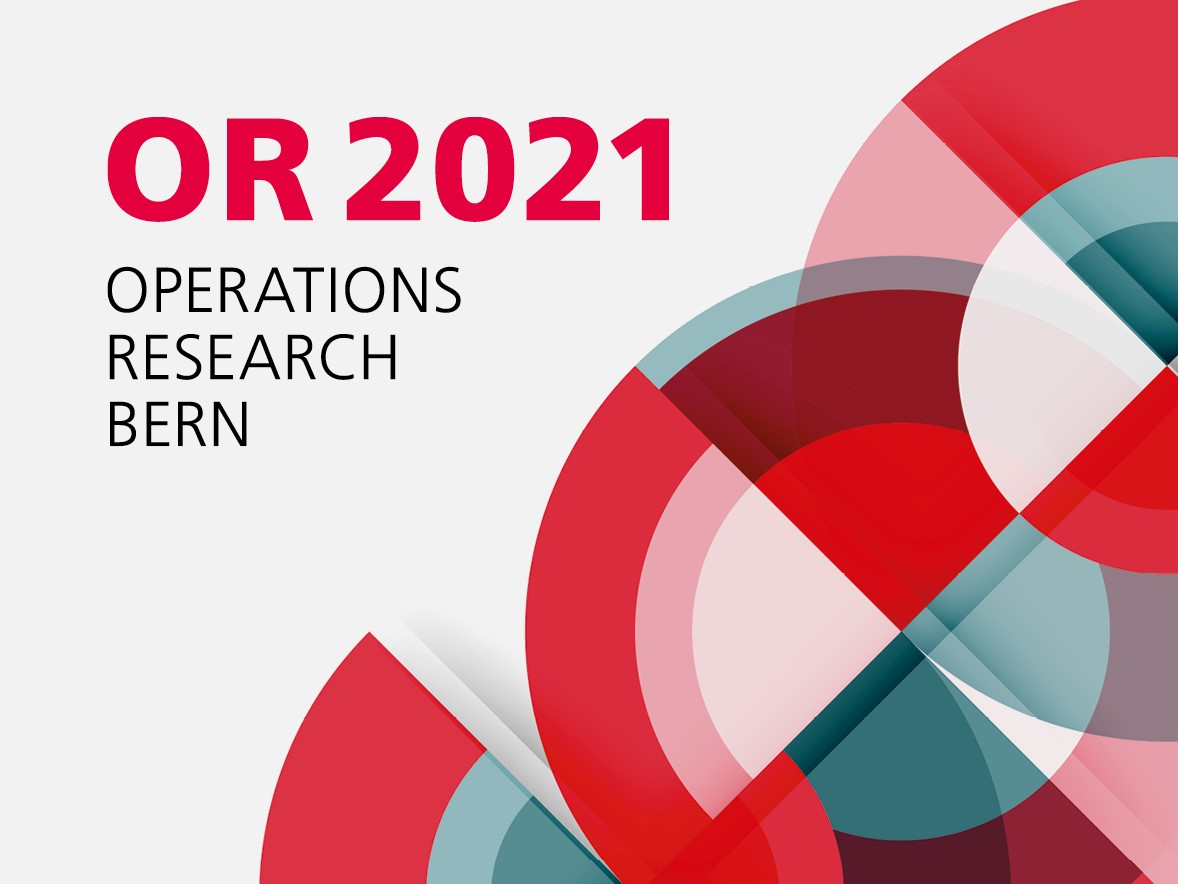 Michael Stiglmayr suggested in his talk on “Hypervolume Scalarization for Biobjective Shape Optimization” a scalarization technique which is compatible with non-convex optimization problems and does not require additional constraints. This is a particularly important property in the context of PDE constrained optimization. Furthermore, an application of this method on a biobjective shape optimization problem is considered, where the shape of a ceramic component is optimized w.r.t. both stability and weight.

For details of the scalarization approach and some numerical results see the related article. 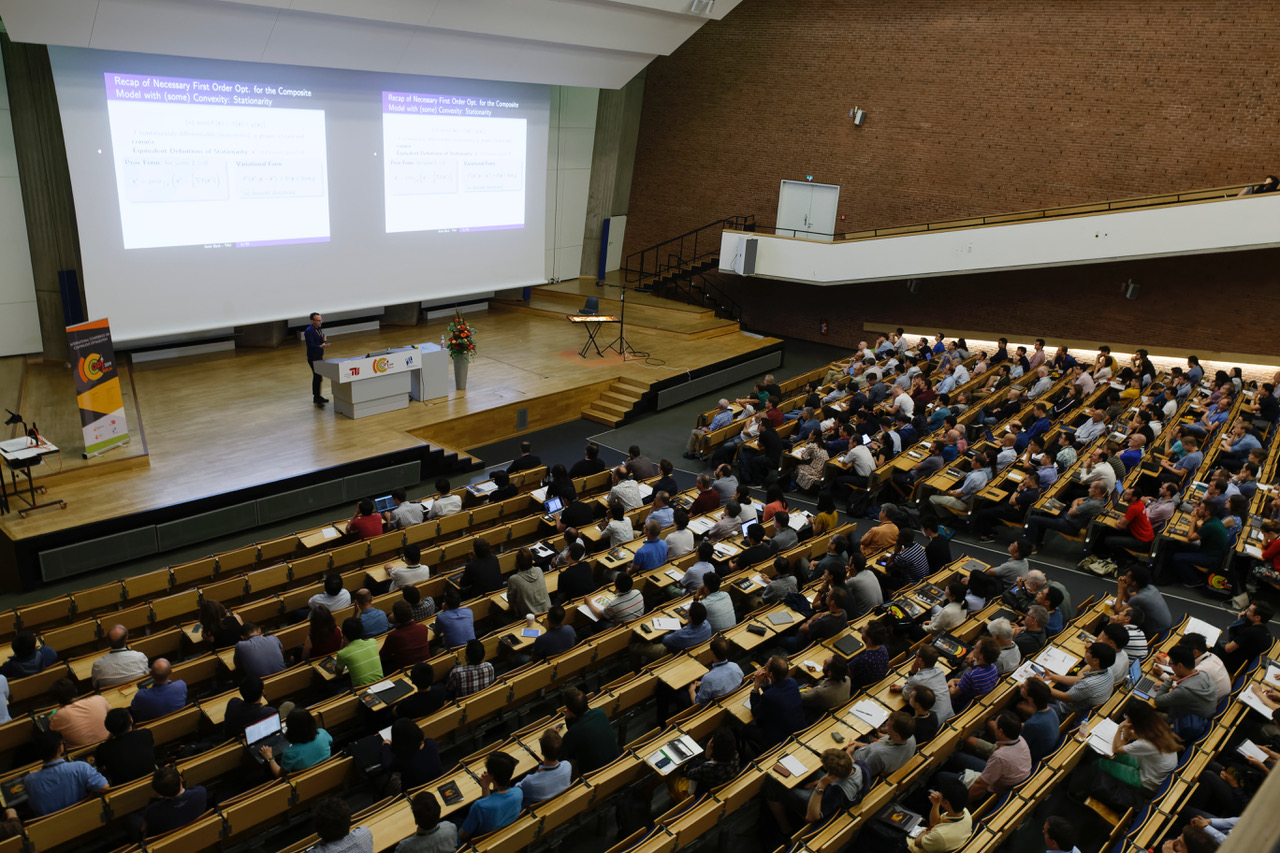 Johanna Schultes of the GIVEN consortium participated at the Sixth International Conference on Continuous Optimization (ICCOPT) and presented a poster about her current research and the results of the paper with the title: “Gradient Based Biobjective Shape Optimization to Improve Reliability and Cost of Ceramic Components” (see publications). 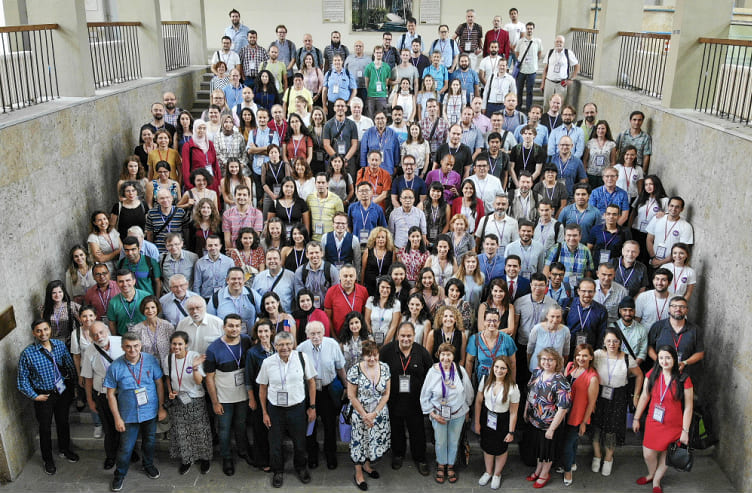 The MCDM 2019 had 261 Participants from 40 different countrys

Results from the GIVEN-Project were presented at 25th International Conference on MCDM 2019: Beyond the Information Age in Istanbul (Turkey). Johanna Schultes and Onur Tanil Doganay held contributed talks in the session “multiobjective optimization with engineering applications ” with the topics:

Both talks were held on the same shape optimization problem and presented different biobjective solution approaches that were explored in the last year.

The MCDM Conference is a biannual conference run by the International Society of MCDM (Multi Criteria Decision Making) . It featured 222 talks and had 261 participants from nearly 40 different countries. This conference has a broad spectrum of attendees which include people with a background in mathematics, computer science, engineering and psychology coming from academia, research laboratories and industry. 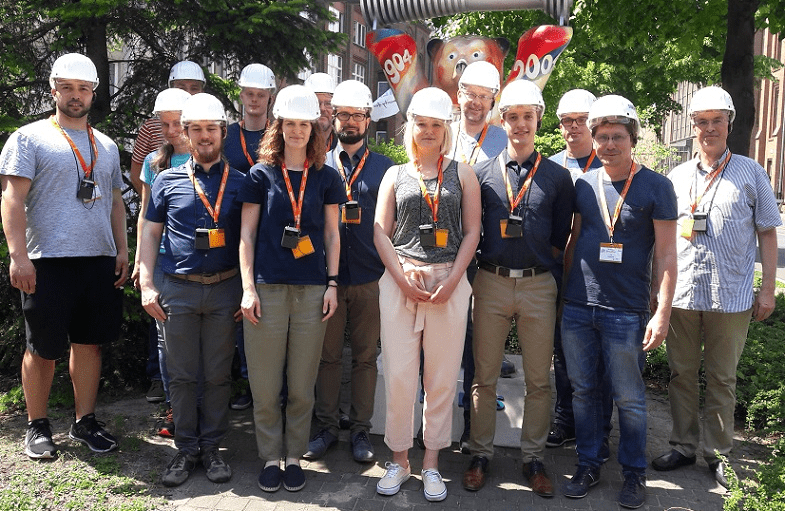 The GIVEN consortium visited Siemens in Berlin for its third scientific workshop. Participants from the Universities of Wuppertal and Trier and the Siemens AG came together and discussed the latest progress of the project.

Two members of the GIVEN-Consortium participated in this year’s SIAM Conference on Computational Science and Engineering with the following two contributions:

Both contributions showed recent advances that had been made by the project in the past year.

The SIAM CSE conference is a biannual conference run by the Society for Industrial and Applied Mathematics and its Activity Group on Computational Science and Engineering in cooperation withe the GAMM Fachausschuss CSE. It is the largest SIAM conference with about 2000 participants.

This year the community convened in the city of Spokane, WA. The audience was naturally interdiscplinary, ranging from mathematicians to engineers with attendees from academia, research laboratories and industry.

Johanna Schultes of the GIVEN consortium participated at the workshop Women in Optimization and presented a poster about results of current research with the topic: “Biobjective Shape Optimization to Improve Reliability and Costs of Ceramic Components using Weighted Sums”.

This year, the workshop took place at the University of Bonn. It combined lectures by experienced scientists with poster presentation by junior researches and offered a lot of space for academic discussions. 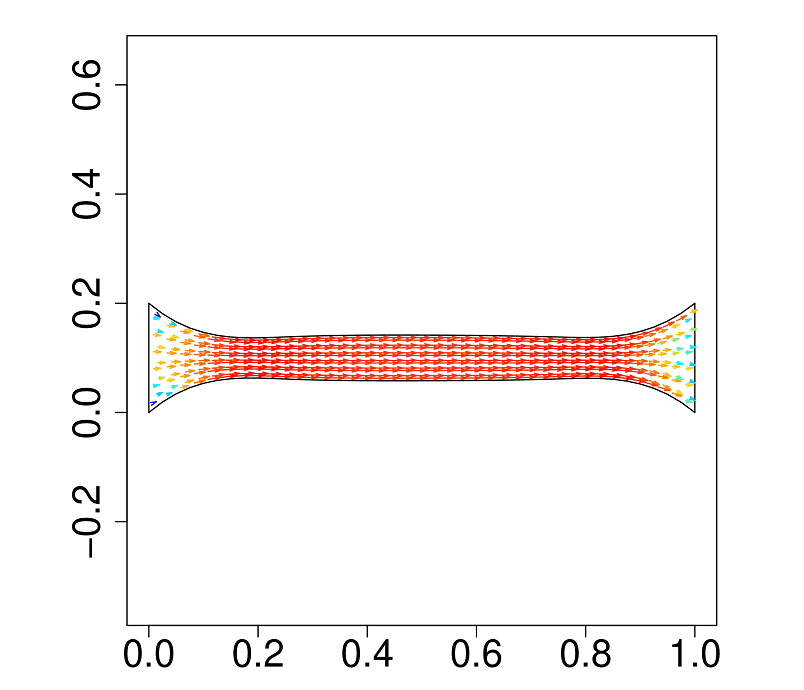 Visualisation of the Stress Field in one Component

For further information about this workshop visit the official website of RAMOO 2018. 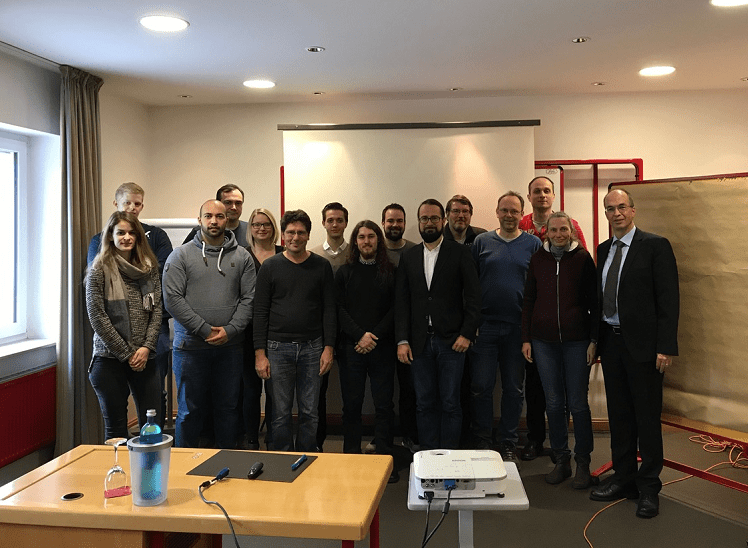 Participants of the meeting in Trier

The GIVEN consortium met on the last days of November 2018 in Trier for its second scientific workshop. 17 participants from the Universities of Wuppertal and Trier, DLR and Siemens AG came together for two days to discuss progress in the GIVEN project and plan future activities. 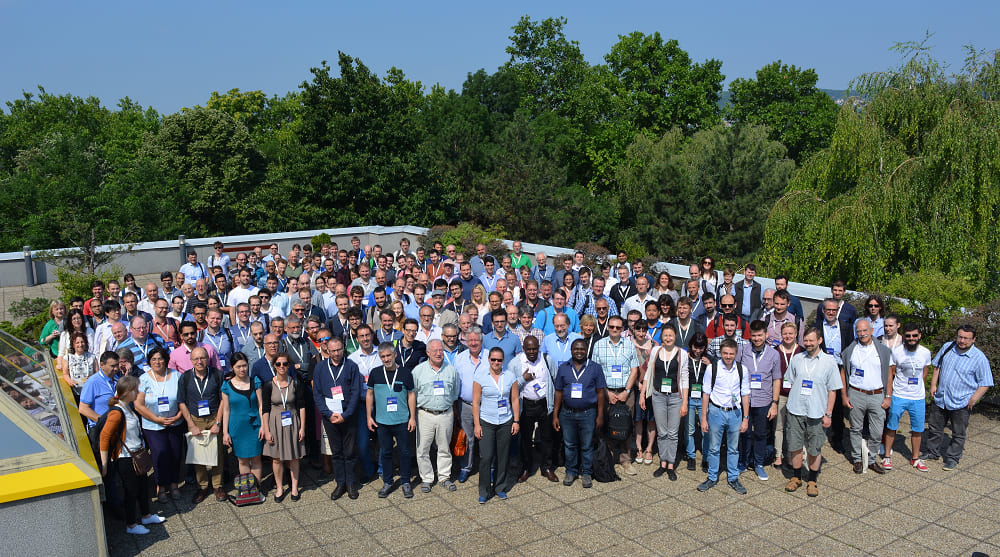 There were given more than 330 presentations on various topics from Numerical Analysis, Stochastics, Optimization or Modeling.

The GIVEN-Consortium participated in the 20th European Conference on Mathematics in Industry (ECMI) in Budapest, Hungary with the contribution “Shape Optimization for a Stochastic Objective Functional“.

The series of European Consortium for Mathematics in Industry (ECMI) conferences are devoted to enforce the interaction between academy and industry, leading to innovations in both fields. These events have attracted leading experts from business, science and academia, and have promoted the application of novel mathematical technologies to industry.

ECMI conferences are organised under the auspices of the European Consortium for Mathematics in Industry, an association of academic institutions and industrial companies that acts co-operatively with the following aims:

For further information about this conference visit the official website of the ECMI.